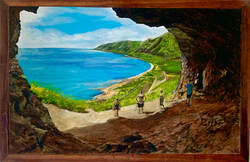 A very gratifying and refreshing hike on the west side of Oahu. With me was Nicole, our good friends Pierre, Christine, and Matt. We weren't sure where the trail to this cave was because it was early spring and the grass was tall. It was hard to tell which way to go, so we ended up going on the wrong direction for a little while. The hills are steep and there are a lot of lose rocks. It was a pretty short hike even with the misdirection; we past the turn to the cave and hiked until it was too steep to keep going, and found it on the way back. it was a very sunny day but there was an intense constant breeze that made the grass dance as if it were worshipping the sun. It moved like the "ola" on a full stadium at a soccer game, revealing how the cold air coming from the atlantic smashes on to the island and moves up the hill. From a distance you can see this motion creating clouds that look very much like waves on the beach, but in slow motion. This cave is pretty large, definitely big enough to shelter a whole family, just a big egg shape bubble on the side of the rock. It felt great to sit and relax on the cool rock on a hot day.